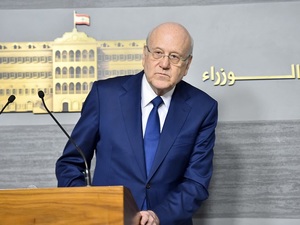 Prime Minister Najib Miqati on Friday called on the country’s newly-elected MPs to “hurry up in the needed steps to name a new premier and form a new government.”

“Any delay in the financial recovery plan will have a high cost that the Lebanese will bear,” Miqati warned, at a press conference that followed Cabinet’s final session at the Baabda Palace.

“The challenges require cooperation among all parties and we no longer have the luxury of time,” Miqati added.

Cabinet had earlier approved a long-awaited financial recovery plan amid the objection of four out of five ministers belonging to Hizbullah and the Amal Movement and reservation by Education Minister Abbas al-Halabi of the Progressive Socialist Party.

Miqati’s remarks come two days before his government starts acting in caretaker capacity in light of the expiry of the current parliament’s term.