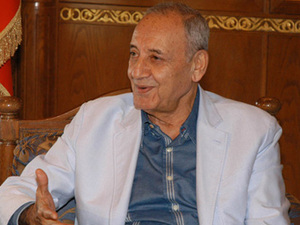 "We hope all colleagues will support this nomination and work for it," the Development and Liberation bloc said in a statement after a meeting chaired by Berri.

By long-standing convention, the parliament speaker post is reserved for a Shiite and Berri's Amal Movement and its ally Hizbullah have won all 27 Shiite seats in the new parliament.

Several opposition blocs have said that they do not intend to vote for Berri.

Separately, the bloc called on all new MPs to "engage in dialogue in parliament to find solutions for all the issues" in order to "rescue Lebanon from the danger it is facing."

"Only dialogue over all those topics represents a real gateway to salvation," the bloc added.

As a free Lebanese, and I hate to say this, Shiite, if any of those new MPs and specially the PSP members who are still "giving it" a thought end up voting for this guy yet again, then there truly is no hope and nothing will ever change.

This guy is the maestro of corruption , nepotism, dysfunction and make Parliament his own Fiefdom. he need to go. he's been there since 1992 and he's 80 or 84 years old. Move on.