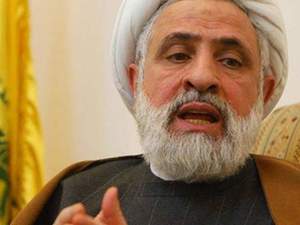 Hizbullah deputy chief Sheikh Naim Qassem has noted that of the 128 new MPs, 77 are with “resisting” Israel, as MP Hassan Fadlallah of Hizbullah stressed there should be “partnership” in the new government.

“March 14’s remnants were 47 MPs in the previous elections and now they have become 36, which is a clear deterioration,” Qassem said in a TV interview.

“If we classify parliamentarians based on who supports resisting Israel and who doesn’t, 77 MPs are in favor of resisting the enemy,” Qassem added.

“We have relations with the moderate MPs from the independent lawmakers and popular groups and organizations that are not linked to embassies,” Qassem went on to say, noting that his party “did not launch treason accusations against anyone in the October 17 protest movement, except for those who are directly linked to embassies.”

Adding that Hizbullah “does not want the parliamentary majority and is not working on securing this majority,” Hizbullah number two stressed that “if someone thinks that they can flip the table on Hizbullah in parliament, they would be mistaken.”

He added that Hizbullah supports the nomination of Nabih Berri for a new term as parliament speaker.

MP Fadlallah of Hizbullah meanwhile said the “hot heads” who are launching “tense speeches and broad slogans” should “calm down a bit.”

“When they sit in their seats in parliament, they will find that there is a constitution and specific laws, powers and roles, and that all their tense speeches will not lead to the places that they are being delusional about,” Fadlallah added.

Turning to the issue of the new government, the MP said: “We have started hearing conditions and far-fetched demands related to the government’s formation, and this means that some have the intention to obstruct and undermine the principle of partnership.”

“They believe that they can rule the country if they get an extra parliament seat, and such people are delusional,” Fadlallah added.

He noted that when Hizbullah calls for “national partnership,” it does so from “a position of strength and from a position of hundreds of thousands of votes” that went to its lists.

“We in Lebanon are the country of diversity and a country in which there can be no ruling majorities, because the sectarian structure does not allow for any one-sided majority to rule,” Fadlallah went on to say.

This guy and his terrorists should run in the Palestinian elections. Their entire agenda focuses solely in Israel, not Lebanon nor the Lebanese wellbeing.

Yes Vichi MPs voted in by complicity or force of arms and intimidation... not much different than the 99% support of Saddam and Kaddafi before their fall, or Assad 95% support. Hizbollah similar to Iranian Basij and all tyrants are murderers and Lebanon's democracy and recovery will never have a chance until we lock these traitors and their Useful Idiots in Jail. Let us see how much genuine support HizbIran will have once disarmed and no longer on Iranian's guards payroll. Hizbollah has assassinated Lebanon's best and is 99% responsible of bankrupting and isolating Lebanon. It is a curse first on Shia as this community is paying the heaviest price for harboring this criminal foreign organization. Courage in Shia and Lebanon is now defined in opposing these tyrants!

Not so veiled or in this case turbaned threats to the individual (السياديون، التغييريون المجتمع المدني) candidates "you side with us or else". Hezbollah's version of the Mafia giving them "an offer they can't refuse".