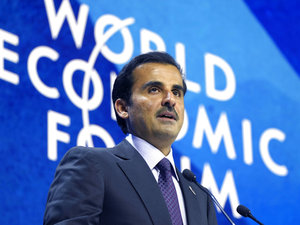 The ruler of Qatar called out Monday double standards in the West while evoking the killing of a Palestinian-American journalist during an Israeli raid this month.

Sheikh Tamim bin Hamad Al Thani said during a speech at the World Economic Forum in Davos, Switzerland, that “we should not accept a world where governments have double standards about the value of people based on their region, race or religion."

He added: “We consider the value of each European life to be just as precious as someone from our region.”

Al Jazeera, which is headquartered in Qatar and was started by Sheikh Tamim’s father in the 1990s, says Israeli gunfire killed its longtime correspondent Shireen Abu Akleh on May 11.

Israel says she may have been shot by its forces but maintains it cannot be certain without further forensic evidence.

Sheikh Tamim called on the world’s political and business elites gathered in Davos to give as much attention as they are to Ukraine to resolving all forgotten or ignored conflicts.

He said “the most glaring example is in Palestine" praying that “the world wakes up to the injustice and violence and finally acts.”

Nothing will happen to fascist state of Israel