Report: At least 60 MPs will re-elect Berri and quorum is 'guaranteed' 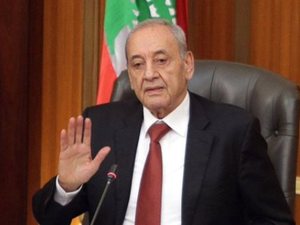 Parliament Speaker Nabih Berri will call next week for a session to elect a new Speaker, sources have said.

The sources told al-Liwaa newspaper, in remarks published Tuesday, that the session will be on Tuesday or Thursday and that the quorum is almost guaranteed.

The newspaper said a boycott is unlikely, and a minimum of 77 MPs will attend the session, yet Berri is waiting to decide on a Deputy Speaker before calling for the session.

At least 60 MPs will vote for Berri, media reports said, including Hizbullah, Amal, al-Marada, the Progressive Socialist Party, the Akkar bloc and the Tashnag MPs.

Sources close to Berri told al-Akhbar newspaper that Berri will be re-elected for sure and that "there's no harm in re-electing him without a majority."

The daily added that a delegation from Amal will visit MP Taymour Jumblat to discuss several files, including the Speaker election.

As for the Free Patriotic Movement's position, a clear announcement might be revealed today as the bloc convenes for the first time since the parliamentary elections.

FPM chief Jebran Bassil had earlier hinted that his bloc might not vote for Berri.

Been telling you all those PSP cannot be trusted.

Not one shiaa MP elected by the opposition. This is a tragedy. There is no alternative candidate to this evil thug!