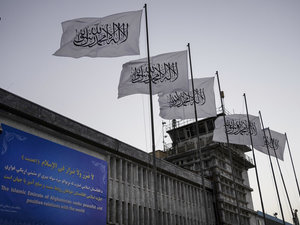 Capital Kabul's only airport was trashed in August when tens of thousands of people rushed to evacuate as the US-led forces withdrew.

While some domestic and international flights are still operating out of the facility, it needs significant upgrades for major foreign airlines to restart full service.

The full operation of Kabul airport is crucial for reviving Afghanistan's shattered economy.

But no country has yet formally recognized the Taliban government, with nations watching to see how the Islamists -– notorious for human rights abuses during their 1996-2001 stint in power -– will rule.

"The current contract is only for offering ground handling services," Hameedullah Akhundzada, Minister of Transport and Civil Aviation said at a press conference.

GAAC has provided these services at Kabul airport since November 2020, and played a key role in rehabilitating the facility in August.

"We are not a new face here," Ibrahim Morafi, regional director of GAAC, told AFP.

"But GAAC signing the new contract will give confidence to international airlines to resume flights to Afghanistan," he said, without specifying when such flights -- including from the UAE -- were expected to resume.

A Qatar-Turkey consortium has been in talks with the aviation ministry for months over operating airports at Kabul, Kandahar, Herat, Mazar-i-Sharif and Khost.

But the talks snagged as the Taliban insisted its fighters will guard the facilities.

Qatar and Turkey want a say in managing security, at least at Kabul airport, experts tracking the negotiations say.

On Tuesday, Afghan officials refused to comment on whether the consortium was still open to operating the five airports.

GAAC officials also declined to comment on whether its new ground handling contract would be expanded into other services.