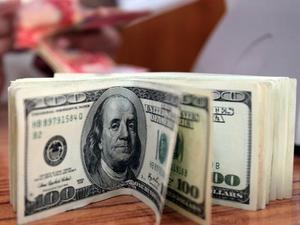 The dollar exchange rate crossed LBP 34,000 on the black market on Tuesday, marking a new record high in the country’s history.

The exchange rate had crossed LBP 33,000 for the first time in Lebanon’s history on January 11, 2022. It later dropped significantly following measures by the central bank.

Lebanon is in the grip of a devastating economic crisis that has been described as one of the worst in modern history. It imports most of its wheat and has faced shortages over the past weeks as the war in Ukraine leads to increases in prices of oil and food products around the world.

Everyone in Lebanon, normal citizens, dikanjeh, taxi driver, airport portal, bakeries, gas stations, vegetables sellers, shoe shine guy, politicians/crooks, talk and quote prices in USD. Even the fanatic Hizbos are obsessed with USD, but yet the Treasury and Bank of Lebanon insists on keeping the LL pound alive although it is at best currently a worthless bank note.

Do the honorable thing and go a full USD economy which you already are but unofficially. I have said numerous times other countries had done so when their currency completely collapsed.