Tensions build up between Miqati, Fayyad over energy files withdrawal 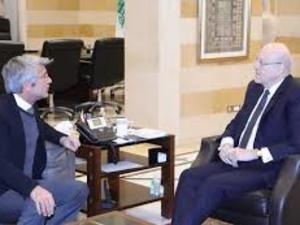 Tensions have built up between caretaker Prime Minister Najib Miqati and caretaker Energy Minister Walid Fayyad over two electricity files that the latter had asked to withdraw from a Cabinet session's agenda on Friday.

Miqati said in a statement Tuesday that Fayyad must be "experiencing a real crisis within his ministry that makes him do something and its opposite."

The caretaker PM said he was surprised by a recent statement by Fayyad as he claimed that the latter had called him and promised him to end the debate and to stop resorting to the media.

"Did the minister issue the statement himself and did he forget what he had promised yesterday," Miqati asked, doubting if the minister is managing the ministry's affairs himself.

On Monday, Miqati had dared Fayyad to say who asked him to withdraw the file and why. "He's trying to cover what he did with confused statements that failed to convince the public opinion," Miqati said.

On Tuesday Fayyad responded that he took the decision on his own free will without any dictations from anyone, daring Miqati to show the full proposal to the public. "Let him sign it on his own responsibility," he said.

Fayyad had told al-Jadeed last week that the withdrawal of the files came after Miqati accused him of taking too long to remove "Selaata" from the file. He said he withdrew the consultancy agreement with French multinational electric utility company EDF because he wanted better prices and better payment conditions.