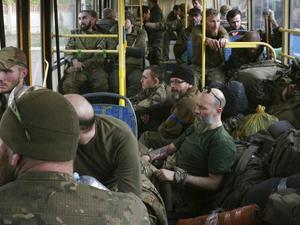 Moscow said Wednesday it would be "premature" to consider a prisoner swap with Kyiv before Ukrainian soldiers who surrendered to Russian troops stand trial.

"Before that, all talk of an exchange is premature," Rudenko told reporters as quoted by Russian news agencies.

Last week, hundreds of Ukrainian defenders of the strategic port city of Mariupol in the country's southeast surrendered after holding out at the city's Azovstal steelworks for weeks.

Among the Ukrainian fighters who gave themselves up were members of the Azov regiment, a former paramilitary unit which has integrated into the Ukrainian armed forces.

Russia describes the unit, which has had previous links to far-right groups, as a neo-Nazi organization.

On Monday, a Kyiv court found Russian serviceman Vadim Shishimarin guilty of war crimes for killing an unarmed civilian and sentenced him to life in prison.