Nasrallah to rivals: Let state survive first so that you ask us to hand over our arms 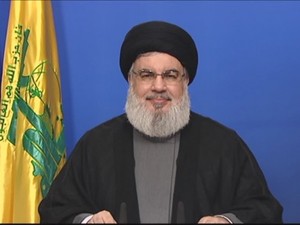 Hizbullah chief Sayyed Hassan Nasrallah on Wednesday cautioned rivals anew that their top concern should be the country’s economic and financial collapse, not his group’s controversial arsenal of weapons.

“Since 1982, Hizbullah and the resistance have never been stronger -- militarily, politically and popularly… Do not err in evaluation and interpretation nor in taking the decision. Let there remain a state and a country so that you can ask us to hand over our arms to the state,” Nasrallah said in a televised speech marking Resistance and Liberation Day.

Warning of an impending “collapse,” Nasrallah cited the dire economic and financial situations and the dramatic surge in the dollar exchange rate on the black market.

“Resolve the country’s crises to that the army and state can survive, and then come to discuss the defense strategy,” Nasrallah said.

“If you want to discuss everything at once come forward,” he added.

“Let us discuss how to protect our oil fortune and how to extract us, and this only needs some boldness,” Nasrallah went on to say.

“I reiterate the call for partnership and cooperation and we are ready to discuss the defense strategy,” he said.

He also warned that those disregarding the economic crises “lack responsibility.”

Turning to the region, Nasrallah noted that the region might “blow up” within days if the Israelis carry out provocative actions in Jerusalem and at the al-Aqsa Mosque compound.

“Within days, things might happen in the region and might lead to the region’s explosion. I say that any harm against al-Aqsa Mosque and the Dome of the Rock will blow up the situation in the region and will lead to dire consequences, because it will provoke the sentiments of all Muslims,” Nasrallah warned.

Lebanon will only be liberated and regain independence when FPM MPs vote with the new MPs to disarm all militias (HizbIran) and refugees; demarcate and control our borders, finalize status of Shebaa Farms; and restore independent judiciary and rule of laws throughout Lebanon. Otherwise, FPM MPs are traitors selling to the Basij Lebanon democracy, freedom, dignity and future of its children for 30 pieces of silver.

We are not "all Muslims" dear Hassoun.
And most of the Muslims are tired of paying a dear price for Palestine.
And the problem we have ARE your weapons. If we get rid of them, investments will flow, aids will flow, trust in this country will rise, corruption will significantly decrease, and we stand a chance to make it.
With your weapons. We are doomed. And you know it! Thug!

"Nasrallah:
It is true that any attempt to disarm Hizbullah by force would lead to civil war."
Or in plain simple English - Hizballah has established a state within Lebanon with the intention of overthrowing that state, in complete contradiction to their original claims ans promises that it would disarm when the Israelis left Lebanese territory.
So they once again prove that it is they who are the aggressors not Israel.