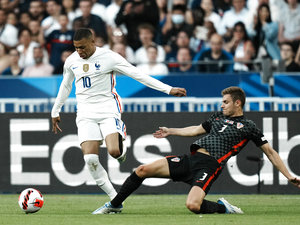 The Spanish league has filed a complaint to UEFA against Paris Saint-Germain, saying Wednesday the French club broke financial fair play rules when it gave Kylian Mbappé a new deal that convinced him to reject a move to Real Madrid.

The league said it denounced PSG to UEFA this week, adding to a similar complaint it made in April against Manchester City, which it says also "continuously fails to comply with the current financial fair play regulations."

The Spanish league said it has also hired law firms in France and Switzerland in order to take additional legal action "before the relevant bodies in France and the European Union as soon as possible."

"LaLiga considers that these practices alter the ecosystem and the sustainability of soccer, harm all European clubs and leagues, and only serve to artificially inflate the market with money not generated in soccer itself," the league said in a statement.

"LaLiga understands that these clubs are being improperly financed, either through direct injections of money or through sponsorships and other contracts that do not correspond to market conditions or make economic sense," the league said Wednesday.

However, the statement did not include any evidence to back up the claims.

The Spanish league argues that it wouldn't be financially viable for PSG to reach an agreement with Mbappé considering its recent losses while maintaining an expensive squad that includes Lionel Messi and Neymar.

The complaint against Man City was filed in April, and the league said it may take further action against the clubs as new data is gathered.

PSG is owned by the state-run Qatar Sports Investments, while Man City is under Abu Dhabi ownership.

Spanish league president Javier Tebas has often attacked state-owned clubs for what he calls their disregard to financial fair play rules. He tweeted after news broke that Mbappé was staying with PSG that it was an "INSULT to soccer."

The French league later wrote a letter to Tebas criticizing his attacks and saying they were unfounded.

The Spanish league said it is also considering legal action against PSG president Nasser Al-Khelaifi for "conflict of interest" over his roles with UEFA and other soccer-related entities.

This is not the first time that the Spanish league has tried to get PSG and Man City punished by UEFA. It also filed complaints against them over breaches of financial fair play rules in 2017 and 2018.

UEFA handed Man City a two-year ban from the Champions League in 2020 for "serious breaches" of FFP rules following an investigation based on leaks published by German daily Der Spiegel. However, that was overturned by the Court of Arbitration for Sport in a decision that the Spanish league branded "bizarre."

UEFA closed another FFP investigation into PSG in 2018 without imposing any sanctions. In 2014, both Man City and PSG were fined 20 million euros (then about $27 million) in the governing body's first round of FFP punishments.

UEFA has been adamant in the past that only its internal investigators can decide when to launch a probe, and its president Aleksander Ceferin has previously dismissed concerns from Real Madrid and the Spanish league about the Mbappé deal.

"Look, not Real Madrid or anyone else will tell UEFA what to do," Ceferin told the BBC last month. "They are outraged from one point of view (over Mbappé) and, as much as I know, their offer was similar to (PSG's) offer."