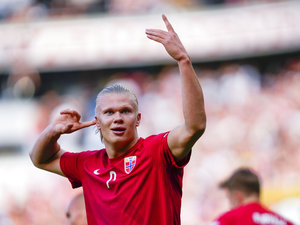 Erling Haaland's English Premier League debut is set to come in an away match at West Ham when Manchester City opens its title defense at the Olympic Stadium.

The schedule for the league's 2022-23 season was released on Thursday, with Liverpool — the team widely expected to vie for the title with City again — starting away to promoted team Fulham. City plays its first game a day later.

The first meeting between City and Liverpool is scheduled for the middle of October at Anfield, two weeks after City hosts Manchester United.

Haaland is the headline signing to the league so far this offseason after joining from Borussia Dortmund. The 21-year-old striker's first competitive home game for City should be at home to Bournemouth in the second round.

Nottingham Forest was promoted via the Championship playoffs and its first match in the league since 1999 is at Newcastle.

The opening game of the season on Aug. 5 sees Arsenal travel to Crystal Palace.

The league will take a break after the weekend of Nov. 12-13 until Dec. 26 because of the World Cup.