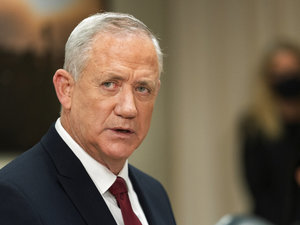 Israel's defense minister on Monday said that Israel is helping build a U.S.-led regional air-defense alliance against Iran, and that the partnership has already thwarted attempted Iranian attacks.

Defense Minister Benny Gantz said he expected the upcoming visit by President Joe Biden to the region to further strengthen this alliance.

In testimony to parliament's powerful Foreign Affairs and Defense Committee, Gantz gave few details about the "Middle East Air Defense Alliance," including what other countries are part of it. He called it the "first element" of a shared vision "in the face of Iran's attempts to attack the region's countries using rockets, cruise missiles and UAVs" — unmanned aerial vehicles, or drones.

"This program is already operative and has already enabled the successful interception of Iranian attempts to attack Israel and other countries," he said. Biden's visit, which includes stops in Israel and Saudi Arabia in mid-July, "will support this process," he added.

Israel considers Iran to be its greatest enemy. Two years ago, it established full diplomatic relations with the United Arab Emirates and Bahrain, two Gulf Arab countries that also feel threatened by Iran.

It also is believed to have behind-the-scenes ties with Saudi Arabia, ties that Israel hopes the Biden visit could strengthen.

the best defense is the attack