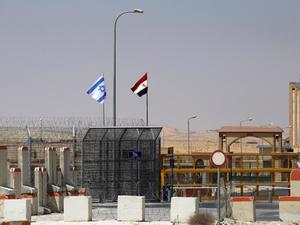 A delegation of Egyptian business leaders was in Israel on Monday, the first such visit in a decade, in a sign of "warming" ties between the two countries, Israeli officials said.

The trip was part of a trade agreement known as QIZ (Qualifying Industrial Zone), which was initiated in 1996 between Israel, Jordan, Egypt and the United States to foster Middle East peace.

The deal allows Egypt to export some products to the US duty free, so long as they include 10.5 percent Israeli inputs.

The visiting Egyptian delegation includes executives from the textile and clothing industries, the Israeli foreign and economy ministries said in a joint statement.

Israel's Minister of Economy and Industry, Orna Barbivay, said the visit "will contribute to the promotion of shared interests for both countries”.

Prime Minister Naftali Bennett met Egyptian President Abdel Fattah al-Sisi in Sharm el-Sheikh in September 2021, the first visit to Egypt in over a decade by an Israeli head of government.

Egypt was the first Arab country in 1979 to sign a peace treaty with Israel, after decades of enmity. Jordan was the second, establishing full diplomatic relations with Israel in 1994.

Egypt now regularly serves as an intermediary between Israel and Palestinian leaders, notably from the Hamas Islamist group that rules Gaza and has no direct communication with Israel.

Israeli-Egyptian relations have proven icy at times, especially during the one-year reign of Egypt's Islamist president Mohamed Morsi in 2012, but broad security cooperation has carried on under Sisi.