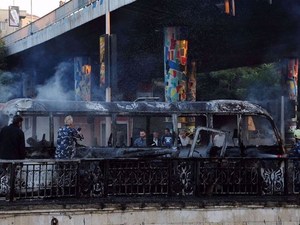 The Islamic State group has claimed responsibility for Monday's attack on a civilian bus in northern Syria that killed 13 people and wounded three.

The extremist group said in a statement late Monday that its gunmen attacked the bus with automatic rifles. It also posted photos of the attack. The Syrian army said 11 of those killed were soldiers. Three soldiers were also wounded, the military said.

The bus was attacked while on the road in the northern province of Raqqa, heading to the central city of Homs.

IS militants proclaimed their so-called "caliphate" in a third of both Iraq and Syria in 2014 and the city of Raqqa was their de-facto capital. They were defeated in 2019 but IS sleeper cells still carry out deadly attacks. The cells have been active in eastern, northern and central Syria.