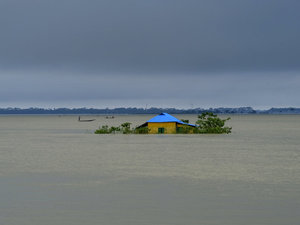 Early and strong monsoon rains have brought heavy flooding to northeastern India and Bangladesh, killing dozens of people, forcing hundreds of thousands from their homes and cutting millions off from crucial supplies.

In the particularly hard-hit area of Sylhet in Bangladesh, villagers waded, swam and paddled makeshift rafts or small skiffs to a boat delivering aid that had moored to one shelter, its ground floor covered halfway to the ceiling with water.

Monsoon rains in South Asia typically begin in June. But this year, heavy downpours lashed northeastern India and Bangladesh beginning in March, triggering floods as early as April in Bangladesh.

Bangladesh Prime Minister Sheikh Hasina surveyed many of the flooded areas by helicopter Tuesday and urged regional leaders to speed up relief efforts at a meeting with them.

The U.N. children's agency says about 4 million people — including 1.6 million children — have been cut off by the floods in the country's northeast and that without fresh drinking water, they could be in serious danger of waterborne diseases.

On the other side of the mountain range to the north of Sylhet in India's Assam state, the torrential rains sent the Brahmaputra River spilling over its banks in many areas, leaving destruction and triggering massive landslides.

Assam authorities reported 10 more flood deaths on Tuesday, bringing its total to 64, with 17 others killed in landslides.

Nearly a quarter-million people are now living in emergency relief camps in Assam, and many others have constructed their own temporary shelters and cobbled together basic rafts to escape areas cut off by the floods.

The National Disaster Response Force and the Indian Army have evacuated thousands of people in the last week from the roofs of their houses with inflatable boats. They fear some people are still missing.

The Brahmaputra River flows from India into northern Bangladesh on its way to the Bay of Bengal, and Bangladesh's Flood Forecast and Warning Center warned Tuesday of dangerously high waters for the next five days.

With rising global temperatures due to climate change, experts say the monsoon is becoming more variable, meaning that much of the rain that would typically fall in a season is arriving in a shorter period of time.