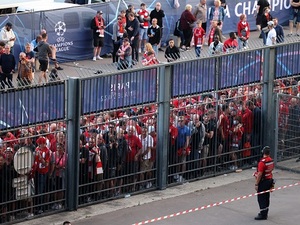 A senior UEFA representative said on Tuesday he did not believe French Interior Minister Gerald Darmanin's claims about the number of fake tickets in circulation during the chaotic scenes before last month's Champions League final between Liverpool and Real Madrid.

Following the game on May 28, Darmanin claimed that between 30,000 and 40,000 fake tickets in the hands of Liverpool fans was the cause of problems as police funneled thousands of fans into overcrowded underpasses around the stadium, leading to the kick-off being delayed by more than 30 minutes.

Martin Kallen, general director of UEFA Events, who are in charge of the body's commercial events, told a hearing at the French Senate, which is investigating the incidents, the figure was much lower.

"We know there were around 2,600 tickets taken to the turnstiles which were fake," Kellen said.

"But a lot of tickets didn't get to the turnstiles... How many? We don't know, we can't really verify.

Keller said other factors caused the problems at the Stade de France, in mayhem that saw the French police use tear gas at close range, even against children.

"It wasn't only the paper tickets that created chaos in front of the gates," he said.

"The reasons are numerous: a transport strike, poor reaction from stewards, police, there were delinquents and an extremely big flux of people in front of the stadium without a ticket or with fake tickets," he added.

Liverpool and Real Madrid supporters are due to give evidence to the Senate later in the day.

UEFA have launched its own probe, overseen by a former Portuguese education and sports minister, which Kellen said would present its conclusions in September.

"We thought the investigation would take a minimum two to three months," Kallen said.

"As it's starting now, we could say sometime in September (for the results)," he added.

Real Madrid won the final 1-0 to become European champions for the 14th time.