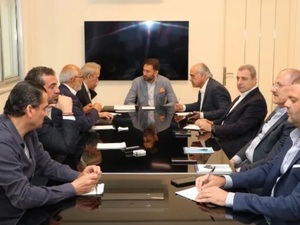 In a statement issued after a meeting in Clemenceau, the bloc also said that it does not want to take part in the new government urging against any delay or obstruction in its formation.

The Gathering also said that the new government must be “a productive and reformist government that has the ability to address the various crises as soon as possible.”

In remarks to al-Jadeed TV, Democratic Gathering MP Faisal al-Sayegh had announced earlier in the day that his bloc has reservation over the “performance” of Mikati’s current government.

“Defeating him is not our objective and he has the lead over the other candidates,” Sayegh said.

“We agree with Speaker Nabih Berri and the (Shiite) Duo over some issues and we disagree over others, and as a Democratic Gathering we are not aiming against Mikati,” the MP added.