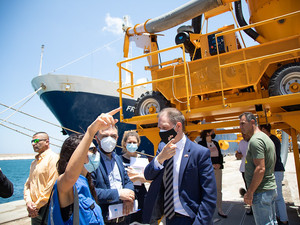 British Ambassador to Lebanon Ian Collard and the British Embassy's Development and Humanitarian Director, Lucy Andrews, on Tuesday visited projects funded by the UK as part of its response to the devastating Beirut Port blast back in August 2020.

Collard visited two of the 43 businesses supported by the UK through the Lebanon Host Communities Support Program (LHSP) in partnership with the Ministry of Social Affairs and Berytech, under the Lebanon Crisis Response Plan framework.

“This funding has helped to restore livelihoods by supporting the recovery of Micro and Small Enterprises affected by the explosion, including through cash grants and business development support. This project secured the retention of more than 300 jobs and is supporting plans to hire an additional 100 employees,” the British embassy said in a statement.

At the port of Beirut, UNDP partners briefed the ambassador on the work being done with the Beirut Port Silos Authorities to support the recovery of the port’s operations. UK support is contributing to organizing and improving the off-loading of wheat and other grains through the provision of necessary machinery.

The UK was amongst the first to respond to the August 2020 Beirut port explosion and has spent $22 million to date.

Furthermore, the UK has been “one of LHSP's primary supporters, providing $94 million since 2014 for host communities and vulnerable refugees across Lebanon, delivering better public services and infrastructure to over 2220 municipalities and over 1 million beneficiaries,” the statement said.

At the end of the visit, Ambassador Collard said: "As I approach the end of my tour in Lebanon, I’m delighted to visit once again projects the UK is supporting. As we approach the second anniversary of the tragic port explosion in August 2020, I’m back at the port today, this time to see how UK support is helping with the recovery of the port’s operations.”

“The UK renews its continued call to ensure the successful conclusion of a fair and transparent investigation and proper accountability for the Beirut Blast. This is the only way to bring closure to the victims, their families and the people of Lebanon,” Collard added.

He said he also had the opportunity to visit two of the 43 businesses in Gemmayze affected by the blast that the British embassy is supporting through the Lebanon Host Communities Support Program.

“It was important to see and hear from people and partners the challenges faced in difficult economic times and the positive impact our projects are having. It was heart-warming to hear from Café owner Nabil and Wissam ready to re-open his boutique hotel, their road to recovery,” Collard added.