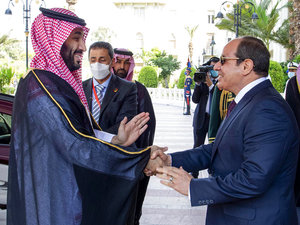 Saudi Arabia and Egypt have stressed in a joint statement that Lebanon should not be a safe haven "for terrorism and drug smuggling."

The statement said that KSA and Egypt support the reforms in Lebanon and that they are keen on the unity and the stability in the country.

The statement also stressed the importance of maintaining the Arabism of Lebanon and the two countries' support to the Lebanese state's institutions.

Bin Salman also visited Jordan and is scheduled to arrive in Ankara on Wednesday, making his first visit to Turkey following the slaying of Saudi columnist Jamal Khashoggi in Istanbul.

Prince Mohammed's Middle East trip comes before U.S. President Joe Biden’s scheduled trip to the region next month. Biden is scheduled to visit Saudi Arabia at the tail end of his July 13-16 trip that includes stops in Israel and the occupied West Bank.

Lebanon/FPM wasted $45 billion on EDL mostly on corruption and produced worst utility system in the world. Egypt is a grand example what $45 billion could have been invested in from the largest fishery, major new transportation corridors with modern rail and hub stations, a new capital city of smart skyscrapers and advanced infrastructure, major irrigation for major agricultural expansion, new Suez canal, new touristic cities (Al-Alamein, etc), world class technologically advanced museums, redeveloping rundown cities around archeological sites with new urbanism and green spaces, new world class industrial centers with advanced AI and robotics, and all accomplished in few years despite the pandemic and low income from tourism. If there is any justice, Lebanese state managers and all FPM/duo ministers should be in jail. We'll make sure of it!