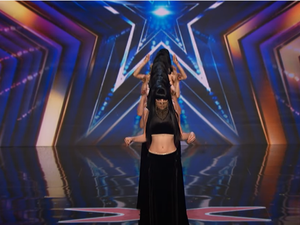 Colombian actress and judge Sofia Vergara has hit her Golden Buzzer for the Lebanese dance group Mayyas in season 17 of America’s Got Talent.

The golden buzz will send the all-female group straight on to the live show.

"I would be so honored to empower you even more in this journey because you deserve it," Vergara said. "It was the most beautiful creative dancing I’ve ever seen."

"Seeing the Mayyas in America’s Got Talent is the most beautiful feeling I have ever felt,” Lebanese choreographer Nadim Cherfan said.

"Lebanon is not considered a place where you can build a career out of dancing," Cherfan added. "It is even harder for women," he said.

A dancer from the group said that al-Mayyas has given the group a free, safe and creative space to dance.

"Unfortunately, being a female Arab dancer is not fully supported yet. Us being here, standing on the biggest stage of the world, is our only chance to prove to the world what Arab women can do; that we can create, the fights we fight," another dancer said.

Despite all the adversity they face, they took they high road and reminded me once again why Lebanon is truly a special place.