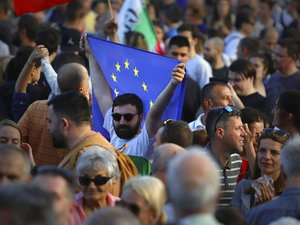 Lawmakers in Bulgaria are set to vote Wednesday on a no-confidence motion against the country's coalition government. If approved, the motion could topple the centrist prime minister and further stall efforts by Balkan countries to join the European Union.

The center-right opposition GERB party filed the motion last week, citing the government's handling of public finances and economic policy in the face of rising inflation.

Prime Minister Kiril Petkov's coalition controls 109 of parliament's 240 seats after a populist partner party, There is Such a People, withdrew its support this month due to similar fiscal complaints and Bulgaria's relations with neighboring North Macedonia over an unresolved ethno-cultural dispute.

Bulgaria has blocked North Macedonia's bid to join the EU, and with it, Albania's as well. The Bulgarian government has insisted North Macedonia formally recognize that its language has Bulgarian roots, acknowledge in its constitution a Bulgarian minority, and quash "hate speech" against Bulgaria. North Macedonia has said that its identity and language aren't open for discussion.

Russia's Feb. 24 invasion of Ukraine has prompted the EU to consider speeding up its membership drive in the Western Balkans, where Moscow still wields considerable influence.

But Bulgaria continues to stall North Macedonia's progress. It has held EU candidate status for 17 years and received a green light in 2020 to begin accession talks, although no date was set for the start of negotiations. North Macedonia's president, Stevo Pendarovski, said last week that the delay has "taken a toll" on the nation.

The European Commission made repeated promises that the future of six countries in the Western Balkans within the EU. Along with North Macedonia, Albania, Bosnia, Kosovo, Montenegro and Serbia have seen delays amid divisions among member countries and some bilateral issues.

France, which currently holds the EU's rotating presidency, said it is making last-ditch efforts to clear the path before a Western Balkans summit scheduled for Thursday and Friday.

Clement Beaune, the French minister for European affairs, said the proximity of the war in Ukraine has put the onus on the 27-nation EU to "reinvigorate" its expansion process in the Balkans.

He said the French government has "activated and reactivated talks" with both North Macedonia and Bulgaria, as well as other EU members.

"I have a hope that we will succeed, but work remains to be done," Beaune said.

Delegations from Serbia, North Macedonia and Albania plan to take part in the EU-Western Balkans summit jointly, a show of regional cooperation following their Open Balkan initiative aimed at easing regional trade and other issues.

The "decision to participate in the summit and approach it jointly is another step toward progress of our countries, but also a clear signal that despite numerous obstacles, we continue to constructively contribute on the road of Euro-integration," a statement from the office of Serbian President Aleksandar Vucic said.

Vucic previously said the leaders of the three countries might boycott the summit, apparently because of the lack of progress in their EU membership applications.

Daniel Smilov, a political science professor at the University of Sofia, said that Petkov, Bulgaria's prime minister, has been a "driving force" in pushing for a resolution to the dispute with North Macedonia and that a collapse of his government could blunt that effort.

"It's quite unfortunate for the North Macedonia situation because simply we don't have a stable majority now in parliament to give the green light to an agreement," he said. "And the French presidency has come up with a very reasonable deal."

The French deal, which has not officially been made available to the public, was sent to both countries last week.

Bulgaria held three general elections last year. Should the government fall after Wednesday's vote, it might need to hold its forth election in a little more than a year. Petkov's coalition, which was formed in December, promised to clean up rampant corruption in the country.