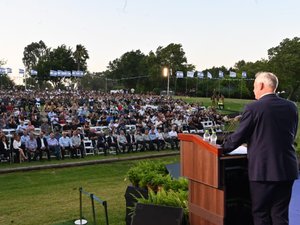 Israeli Defense Minister Benny Gantz warned Wednesday that “if needed,” the Israeli army “will march once again to Beirut, Sidon and Tyre,” while noting that Israel “does not want a war” and that it is “willing to go very far on the path to peace and settlement.”

Speaking at a rally in Kiryat Shmona to mark the 40th anniversary of the 1982 invasion of Lebanon, Gantz said that should Israel need to “carry out an operation in Lebanon,” it will be “powerful and accurate.”

“It will levy a heavy price for the Iranian Hezbollah and Lebanese shipments. In the face of a threat to the citizens of Israel, no infrastructure used to harm us will be immune,” he added.

“We do not want a war and we are willing to go very far on the path to peace and settlement, such as the maritime border between us and Lebanon, which we must conclude quickly and fairly. For the dying Lebanese economy, it will be a breath of fresh air, and I hope it will also be a significant step in strengthening stability in the region,” Gantz went on to say.

He added that Israel’s conflict is “not with the citizens of Lebanon,” noting that Israel has “reached out many times” to Lebanon’s citizens, “including in the past year.”

“There are paths to walk on, the other side should have the courage to start walking,” Gantz said.

Israel and Hizbollah: 2 sides of the same coin, they need each other to survive and justify arms and oppression, a match made in hell. Israel should enact a monument to thank Hizbollah for protecting its border and destroying any competition with Lebanon in international trade, port activity, banking. education, and Lebanese historical role in providing technical and financial expertise to Gulf nations. Soon Israeli experts will displace Lebanese managers in Dubai and all the Gulf region. No other organization in the world has provided more services to Israel than Hizbollah, an Iranian militia that is created, funded, armed and indoctrinated by Iranian Basij.