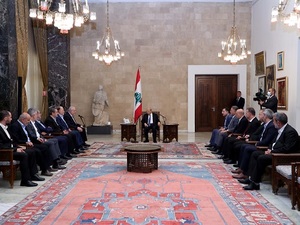 The MPs are divided between caretaker PM Najib Mikati and ex-President of the U.N. Security Council Nawaf Salam, while many had announced they will not nominate anyone.

Mikati, the candidate with the highest chances, lacks the support of the two largest Christian blocs, the Free Patriotic Movement and the Lebanese Forces, who had announced that they will not name him. He also doesn't have the support of the Druze MPs.

He is widely expected to get the largest support from legislators to form a new Cabinet that will be in power until the end of October when President Michel Aoun’s six-year term expires. Such a short tenure could make it difficult for the billionaire premier to form a Cabinet since it usually takes months to form a government in Lebanon due to political bickering.

Mikati has the backing of Hezbollah and its Shiite ally, the Amal Movement of Parliament Speaker Nabih Berri. Mikati also has the support of some Sunni legislators.

Salam, on the other side, is backed by some independents as well as the nationalist Kataeb Party and the Democratic Gathering bloc backed by Druze leader Walid Jumblat.

The new government’s main mission will be to continue talks with the International Monetary Fund over an economic recovery plan for Lebanon, which is in the grip of its worst economic and financial crisis in its modern history.

As MPs met with President Michel Aoun, officially naming their candidates, they urged for a quick government formation.

In Lebanon's unique and chaotic brand of sectarian consensus politics, forming a government can take months, even when the country faces multiple emergencies.

Between the two latest elections, two out of four years were spent under a caretaker government with limited powers as the country's political barons haggled over cabinet line-ups.

The latest government, led by Mikati, has only been in place since September 2021 after a 13-month vacuum.