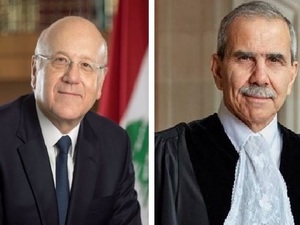 Deputy Speaker Bou Saab was the first to meet President Michel Aoun Thursday, as the binding parliamentary consultations kicked off in Baabda.

Bou Saab of the Free Patriotic Movement did not nominate anyone, neither did his bloc, except for Akkar MP Mohammed Yehya who named Mikati.

The Democratic Gathering, the North of Confrontation bloc, al-Kataeb, MP Ghassan Skaff, and ten out of the thirteen Oct. 17 MPs nominated ex-President of the U.N. Security Council Nawaf Salam. MPs Elias Jradeh, Halima Qaaqour and Cynthia Zarazir did not nominate anyone.

Who's the guy on the right?