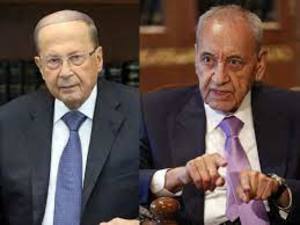 Less than a week from the deadline for President Michel Aoun to sign the decree of military and security officer promotions, a dispute over the issue between Aoun and Speaker Nabih Berri is still ongoing, media reports said on Thursday.

“Berri is still refusing to agree to the promotions of the officers who graduated (from the Military School) in 1994 under the excuse of ‘sectarian imbalance,’” al-Akhbar newspaper reported.

Berri had asked former finance minister Ali Hassan Khalil during the terms of several previous governments to refuse to sign the decree.

Caretaker Defense Minister Maurice Slim and Deputy Speaker Elias Bou Saab have meanwhile launched mediation efforts in order to reach “a settlement that would resolve the pending issues all at once,” al-Akhbar said.