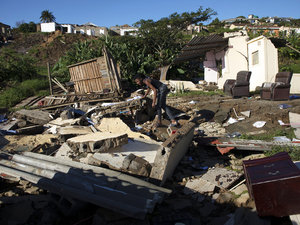 Leaders of Commonwealth nations are calling for increased climate action at a meeting in Rwanda this week, ahead of the United Nations climate change summit in the seaside resort of Sharm El Sheikh in Egypt later this year.

"What it needs, friends, is for us to focus on implementation, and every country must respond to the Glasgow climate pact," Sharma said, speaking at a business forum on the margins of the Commonwealth summit in the Rwandan capital, Kigali.

Commonwealth governments must submit their emission reduction targets by Sept. 23, he said, "including their long-term strategies."

Sharma noted that for island nations such as Barbados "the situation is devastatingly clear," and tackling climate change "is the difference between life and death."

Britain's Prince Charles, representing Queen Elizabeth II as the ceremonial head of the Commonwealth, is expected to champion the bloc's global climate action.

Speaking at another meeting on the side of the summit, Commonwealth Secretary-General Patricia Scotland said that responding to climate change requires "the most significant political, social and economic effort that the world has ever seen."

The Commonwealth's Living Lands Charter, she said, "is a testament to our commitment. It helps to encapsulate our combined effort to hold the global average temperature increase to 1.5 degrees Celsius (2.7 Fahrenheit)."

According to the charter's concept note, obtained by The Associated Press, the Commonwealth's commitments will focus on five main themes: climate-resilient agriculture for food security, soil and water conservation, green cover and biodiversity, climate-resilient livestock rearing, and climate-resilient development for indigenous people. In what's billed as a "five-by-five" approach, it aims to achieve its climate goals through a mixture of policy influence, financing, technical assistance, governance and sharing knowledge across nations.

The Commonwealth brings together states representing a combined population of 2.5 billion people, most of which are former British colonies. It claims that if the charter is endorsed and implemented in full, it will "protect and manage a quarter of the world's landmass."

The charter is also calling for "greater consideration on inclusion of indigenous peoples" in countries' voluntary, nationally determined contributions on climate action.

Some 32 of the Commonwealth's member nations are small states, with 25 of them being small islands and developing states classified as vulnerable to climate change.

The island states at the forefront of climate action have already called on the Commonwealth to strengthen measures on oceans.

"The oceans and climate are inextricably interconnected, and the health of our oceans dictates the livelihoods of millions of people around the world," said Jitoko Tikolevu, a Fijian diplomat. "Our answer is simple, we need action."