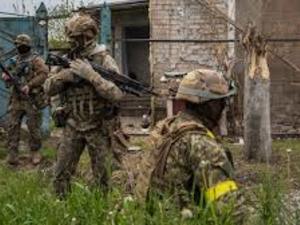 Ukraine's northern border region of Chernigiv came under "massive bombardment" from the territory of Russia's ally Belarus on Saturday, the Ukrainian army said.

"Around 5:00 o'clock in the morning (0200 GMT) the Chernigiv region suffered a massive bombardment by missiles," Ukraine's northern military command wrote in a statement on Facebook.

"Twenty rockets, fired from the territory of Belarus and from the air, targeted the village of Desna," it said, adding that infrastructure had been hit without any reported casualties.

Desna, a small village with a pre-war population of around 7,500 people, lies 70 kilometers (43 miles) to the north of Kyiv and a similar distance to the south of Ukraine's border with Belarus.

Belarus has provided logistical support to Russia's invasion of Ukraine, especially in the first weeks of the offensive, although it officially remains a non-belligerent at this stage.

The country, led by Lukashenko since 1994, has also been targeted by Western sanctions aimed at Russia over its assault on Ukraine.