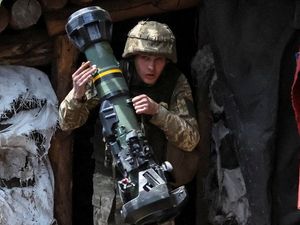 British military leaders warned Tuesday that UK armed forces must "mobilize" in response to the threat posed by Russia, with the army's new chief invoking the Allies' struggle against Nazi Germany.

Defense Secretary Ben Wallace and Patrick Sanders, a general and the army's most senior officer, both argued in separate speeches that Britain's army must ramp up its readiness following Moscow's invasion of Ukraine.

Wallace, who has been in post for three years, also suggested the government will need to further boost defense spending to meet the heightened threat.

"There's a very real danger that Russia will lash out against wider Europe, and that in these days of long-range missiles and stealth, distance is no protection," he told an audience at military think-tank the Royal United Services Institute.

"Investment needs to continue to grow. Before it becomes too late to address the resurgent threat and the lessons learned in Ukraine, it is time to mobilize, to be ready and to be relevant."

His comments came as NATO members met in Madrid Tuesday for a three-day summit, after the military alliance announced it would boost its high-readiness force from 40,000 to 300,000 troops.

NATO chief Jens Stoltenberg has called the move "the biggest overhaul of our collective defense and deterrence since the Cold War."

He said Britain faced "a new reality" and "a race to mobilize" and needed more soldiers at perpetual high readiness alongside broader modernization plans.

"This is our 1937 moment," Sanders added, referring to the Western Allies' struggle to subdue Nazi Germany before World War II.

"We must act rapidly so that we aren't drawn into one through a failure to contain territorial expansion."

Adding that it was "dangerous" to assume Russian aggression will end with Ukraine, Sanders predicted Moscow will be "an even greater threat to European security after Ukraine than it was before".

"The Russian invasion has reminded us of that time-honored maxim that if you want to avert conflict, you better be prepared to fight," he said.

Sanders explained mobilization would now be the army's "main effort" over the coming years in four key areas, including rethinking "how we fight" and reviewing the structure of the army, alongside the readiness-boosting and modernization drive.

However, it comes amid plans to reduce the size of Britain's army by around 10,000 to 70,000 soldiers, and reported private demands from Wallace for increased funding due to the Ukraine conflict.

Noting this, Sanders said: "As the threat changes we'll change with it".

"It would be perverse if (I) was advocating reducing the size of the army as a land war rages in Europe and (Russian President Vladimir) Putin's territorial ambitions extend into the rest of the decade and beyond Ukraine," he added.

But asked whether he would reverse the planned cuts and heed calls for more defense spending, Britain's Prime Minister Boris Johnson was noncommittal.

"Clearly, we have to respond to the way the threats continue to change," Johnson told British broadcasters, as he headed to the NATO summit from a separate G7 leaders gathering in Germany.

Johnson added he had already instigated "the biggest increase in defense spending since the end of the Cold War," noting a boost of £24 billion ($29 billion) announced last year.

He also downplayed the prospect of any imminent conflict with Russia.

"I don't think it will come to that and clearly we're working very hard to make sure that we confine this to Ukraine," Johnson said.