Safe-standing areas to be allowed in some European games 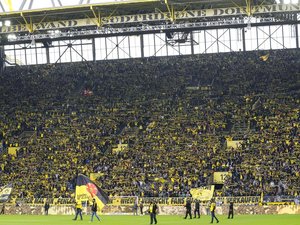 Safe-standing areas will be allowed on a trial basis at European club games involving teams from England, Germany and France this season, UEFA said.

European soccer's governing body said it will assess the findings of what it calls an "observer program" at the end of the season and decide whether to continue or expand it.

The three countries in question are already authorized to have safe standing at the domestic level. In England, Manchester City, Manchester United, Liverpool, Chelsea and Tottenham all have safe-standing licenses.

Borussia Dortmund, which has a vast standing area called the "Yellow Wall" known for its passionate supporters, said it will be able to host Champions League games at its full 81,365 capacity for the first time.

The German club uses safe-standing areas for domestic games but has had to convert those sectors to seating for European games. That reduces the stadium's capacity by about 15,000.

"That's great news. Standing tickets are an important part of our football culture. Borussia Dortmund have been working hard behind the scenes in recent years to obtain permission for safe-standing areas in European competitions," CEO Hans-Joachim Watzke said. He called on fans to "behave responsibly with this opportunity."

UEFA is limiting the trial to the top-five associations in its rankings. Spain and Italy do not currently have safe-standing areas.

The final of each of the three UEFA competitions will be excluded from the trial.

"The objective," UEFA said, "is to assess if and under what conditions standing may be reintroduced in UEFA competitions in a safe manner."