Injured Laporte to miss start of the season for Man City 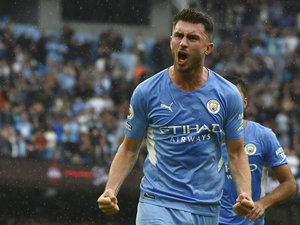 The Spain international, who was a mainstay at center back for City last season, hurt his knee in the 5-1 win over Wolverhampton in the third-to-last Premier League game of last season. He managed to play through pain in the team's final two games.

Laporte has since had an operation and will miss the start of City's season.

"So far he is doing really, really well but we have to be careful because it was the knee. He needs time," Guardiola said Friday, speaking ahead of Saturday's Community Shield against Liverpool — an annual preseason match between the Premier League champions and the FA Cup winners.

"August, he will be out. Maybe September he starts to be with us."

Guardiola would not be drawn on any potential move for Brighton left back Marc Cucurella, who has been linked with City.

Guardiola nodded when it was put to him that Cucurella has put in a transfer request at Brighton, before saying: "He is a Brighton player, I cannot say anything else."

Asked if it was his intention to sign a left back after selling Oleksandr Zinchenko to Arsenal, Guardiola said: "If possible, or we stay with what we have."