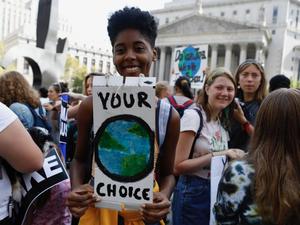 Hundreds of young climate activists marched through Turin on Friday, after a week of discussions on the future of the increasingly global school strike movement.

The northwestern Italian city hosted a European meeting of the Fridays for Future movement, as well as an international "Climate Social Camp" featuring discussions on how global warming relates to social issues.

Greta Thunberg, who started the Fridays movement with her school strike in 2018, had been due to attend but pulled out due to personal reasons.

After two years of disruption caused by the pandemic, "we're here to rebuild, to remobilize and get out on the street", said Sam Smithson, 40, attending the climate social camp from the UK's Extinction Rebellion movement.

According to the program, the Fridays for Future talks were focused on how the movement should progress as it grows.

This includes how different geographical chapters cooperate, and how to ensure activists in the countries most affected by climate change are heard, but also whether to switch to more radical action.

The Climate Social Camp meanwhile covered issues from the environment to migration and feminism, with many activists staying in a sea of tents set up under the trees of Turin's Colletta park.

Nansedalia Ramirez Dominguez, a 25-year-old activist from Mexico, said she was hoping for solidarity from European movements with those places where activists were taking many more risks in environmental protests.

"In the global north, if you are arrested, probably the next day or the third day you will be released. But in indigenous communities, you can't come back to life if you are killed," she told AFP earlier this week at the camp.

The camp hosted discussion groups and workshops, while nearby the desperately low River Po, suffering from Italy's worst drought in 70 years, was a reminder of an increasingly volatile climate.

"We won't have the revolution at the end of the week," noted Louise Wagner, a 29-year-old who lives in Germany.