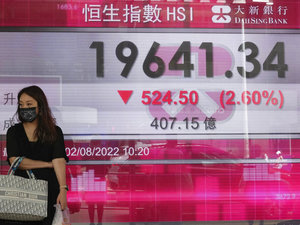 "Tensions ramped up on reports that Pelosi is due to visit Taiwan later this evening," noted CMC Markets analyst Michael Hewson.

Traders were already skittish after a string of data showed economies beginning to take a hit from surging inflation and central bank interest rate hikes aimed at taming prices.

A possible meeting between Pelosi and Taiwanese President Tsai Ing-wen is sure to anger Beijing, which views the island as its territory and has said the White House was playing "with fire".

While observers do not think the move will spark a conflict, U.S. officials said China was preparing possible military provocations that could include firing missiles in the Taiwan Strait or "large-scale" incursions into Taiwan's airspace.

Heightened tensions between the world's two superpowers have sent shivers through trading floors, compounding worries that Russia's invasion of Ukraine could escalate into a wider war.

"Pelosi's proposed visit has been met with numerous threats from Beijing including an unspecified military response.

"They have continued this morning, hours ahead of the apparent arrival which is clearly making investors very nervous."

Reports of the visit hit U.S. stocks, with all three main indexes reversing an early rally to end in negative territory.

And Asia followed suit, though some markets recovered as the day wore on.

Hong Kong and Shanghai led losses, shedding more than two percent, while Taipei was off more than one percent along with Tokyo.

The safe-haven yen jumped to a two-month high against the dollar.

The Taiwan dollar meanwhile sank to its lowest since April 2020 before bouncing back.

The flare-up in tensions comes less than a week after U.S. President Joe Biden and Xi Jinping held phone talks during which the Chinese leader warned the United States not to "play with fire".

The market selloff comes as investors try to assess the outlook for the global economy as leaders try to bring down sky-high inflation by lifting rates while at the same time maintaining growth.