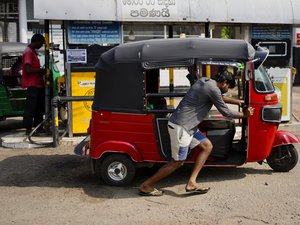 Sri Lankans who have endured months of fuel and food shortages are bracing for more pain as a newly installed government scrambles to find solutions to the Indian Ocean nation's economic emergency.

Like many others, fish monger Gamini Mallawarachchi says he is pinning his hopes on President Ranil Wickremesinghe 's ability to revive the economy and restore stability after months of turmoil and protests.

"Things are really, really bad now and my life is almost ruined," said Mallawarachchi, who has given up on selling fish because he can't find fuel to get to the village where he used to buy it, and anyway his customers were buying less and less.

"I think he will do something. With his experience and knowledge, I believe he has the capability," said Mallawarachchi. "But, he must show some results before the end of this year, otherwise, he will also have to face protests from the people," he said.

Sri Lanka inched closer to ending its dire economic and humanitarian crisis with the July 20 appointment of Wickremesinghe's new government after months of protests and turmoil. But daunting hurdles lay ahead.

Lawmakers backed him in extending a national emergency that gives the president broad powers to crack down on any violence. That may buy him time to try to reach a deal with the International Monetary Fund on a requested $3 billion bailout.

By his own admission, that's easier said than done.

On Saturday, Wickremesinghe said he has pushed back by a month his aim of getting an agreement by early August since talks with the IMF stalled amid recent political turmoil.

So far there are scant signs of progress in negotiations with Sri Lanka's other creditors on more than $50 billion that it owes to lenders.

"Because public debt is assessed as unsustainable," the IMF's approval would "require adequate financing assurances from Sri Lanka's creditors that debt sustainability will be restored," the lending agency said in a statement. That would require lenders, both public and private, to agree to accept smaller payouts on bonds, lower interest rates or extended repayment terms.

IMF conditions also would likely involve tax increases, better safeguards against corruption and other reforms such as privatizing state-owned companies like the national airline.

"He's in a bind," said Tamanna Salikuddin of the U.S. Institute of Peace, an independent institute based in Washington, D.C.

Austerity measures are a bitter pill to swallow for people who are going hungry and walking or biking to work because they cannot buy fuel. And raising taxes would likely undercut support from stalwarts in the ruling party who benefited from the tax cuts that helped deplete state coffers, she noted.

In June, Wickremesinghe, who was then prime minister for the sixth time, suggested a conference of major donors such as India, China and Japan. Sri Lanka, whose foreign exchange reserves are largely exhausted, is seeking "bridge financing" to be able to buy fuel and other essential supplies to keep the economy running.

"We have to hope that friendly countries will support Sri Lanka in the short term," said political analyst Jehan Perera.

On a visit last week to New Delhi, Samantha Power, administrator for the U.S. Agency for International Development, contrasted India's aid to China's, and urged Beijing to do more. India's government says it has provided more than $1.5 billion in credit for purchases of fuel, food, medicine and other essentials.

Asked about Sri Lanka's debt impasse — and criticism that China's lending is not transparent — Foreign Ministry spokesperson Zhao Lijian accused the U.S. and other "western capital" of manipulating Sri Lanka's credit rating, speculating in its markets and preventing it from obtaining new financing.

"We hope the U.S. can genuinely help Sri Lanka overcome the current difficulties, ease the debt burden and realize sustainable development instead of unscrupulously using every opportunity possible to shift the blame, smear other countries and seek geopolitical games," Zhao said.

Official Chinese lending to Sri Lanka accounts for only about 10% of its debt but the amount of additional commercial borrowing from China is unclear.

"Unless and until the rest of their debt is restructured I don't see the Chinese doing anything," said Salikuddin. "They never take the first step."

As talks with Sri Lanka's lenders drag on, its people carry on, finding ways to get by and often waiting days in lines for gasoline, sometimes still returning home empty handed.

"Even if a deal (with the IMF) is agreed, Sri Lanka still faces a tough road ahead as far as its economic recovery goes. By no means is it that a deal is agreed and things get back to normal very quickly," Gareth Leather of Capital Economics said in a recent online briefing.

The state-owned gas company has begun distributing cylinders of cooking gas — a mixture of propane and butane — but most people have to wait at least overnight to be able to buy them and the price has more than tripled since October.

The aim is to reduce the long queues at gas stations and crack down on a black market in fuel. Priority is being given to school buses, farming, fishing, tourism and public transport.

Many people say they've cut back or virtually given up on eating fish and meat due to high prices. Milk powder is hard to come by and prices of most essentials including bread and lentils have tripled.

"People will be more patient and will be prepared to wait as long as the acute shortages are dealt with," said Perera. "Otherwise, it will be like a tinder box — you can see angry people on the roads every day in their cars, motorbikes. Angry people, it's a tinder box situation, and a spark would lead to more turmoil."

Mallawarachchi, the fish monger, used to earn about 6,000 rupees ($16) a day. Now he's living off his savings.

Sithum Udara, an office clerk, still goes to work, but what used to be a quick, comfortable commute by motorbike has become a misery of cramming onto buses or a train.

"Going to office is a nightmare now. I am really fed up and I think this is the worst time of my life," Udara said. "I have no choice but to go to work."

But Udara believes Wickremesinghe should be given "considerable time" to revive the economy and solve other problems. "He can't do it overnight; people must understand that reality."

For now, a big part of the president's job is managing expectations.

"The first thing he has to do is deliver on the economics," Salikuddin said. "It's the bankruptcy of the economy that brought people into the street," she said.