Madrid bets Benzema will stay in top form for another season 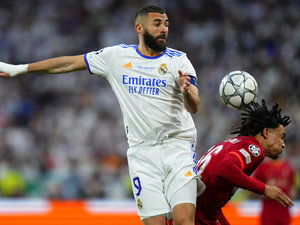 When Karim Benzema went down in pain after getting hurt in a practice session during Real Madrid's preseason tour in the United States, it was understandable why his teammates and the coaching staff appeared concerned.

Madrid can't afford to lose Benzema, who was the team's best player last season and had a key role as the club won the Champions League and the Spanish league.

To repeat its success, Madrid knows it will need the 34-year-old France striker to perform at a high level for another season. And the club bets he can do it — Madrid didn't make any major additions to its attack.

Thankfully for Madrid, it was just a knock that brought Benzema down in practice across the pond. He is set to be ready when Madrid begins its season this month.

"Benzema is in good shape," Madrid coach Carlo Ancelotti said during the team's preseason tour. "He is fine despite not having trained much. He came back well. He's fine but still needs to work on his fitness."

Benzema did not play in the friendly against Barcelona in Las Vegas a few weeks ago, when Madrid struggled offensively in a 1-0 loss. Benzema was back in the starting lineup against Mexican club América in San Francisco, playing well and scoring a goal in the 2-2 draw. He also scored once in the team's 2-0 win over Juventus in Los Angeles.

"Benzema is the best player in the world, so we obviously lack something when he is not playing," Ancelotti said.

Madrid is hoping Benzema can perform at least close to how he did last season, when he led an attack that also included Vinícius Júnior and Rodrygo. The trio helped the club score 80 goals in the Spanish league, 12 more than any other club.

Benzema also was crucial as a leader and advisor to the youngsters.

"Karim's been telling me to be brave since I arrived at the club," the 22-year-old Vinícius said. "We have had a very good connection and have linked up to win a lot of games."

Benzema himself had his best season ever, being the top scorer in the Spanish league and the Champions League. He scored 44 goals from 45 matches with Madrid, and equaled Raúl González as the club's second-highest scorer with 323 goals, behind the 451 of Cristiano Ronaldo.

The Frenchman, a strong candidate to win best player of the year awards for his performances last season, has thrived after being in the shadow of Ronaldo until the Portugal star left for Juventus in 2018.

Madrid did not make many high-profile signings since Ronaldo left, and its attempt to boost its attack with Kylian Mbappé failed this season. The other forwards in the squad include Eden Hazard, Marco Asensio and Mariano Díaz. Gareth Bale left at the end of last season and the club did not replace him.

The team's only additions to the squad came in defense with central defender Antonio Rüdiger and midfielder Aurélien Tchouaméni.

If Benzema remains in top form, though, Madrid should do just fine with the players it has in the squad.

Madrid's season begins on Aug. 10 in the UEFA Super Cup against Eintracht Frankfurt in Helsinki. The club will play its first match in the Spanish league on Aug. 14 at promoted Almería.