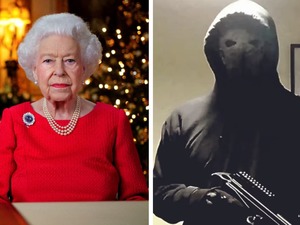 Police on Tuesday charged a 20-year-old man with an offence under Britain's 1842 Treason Act after arresting him armed with a crossbow at Windsor Castle as Queen Elizabeth II spent Christmas Day there.

Jaswant Singh Chail, from Southampton in southern England, has also been charged with making threats to kill and possession of an offensive weapon following the incident at the castle, southwest of London, last year.

He is currently in custody and will appear at Westminster Magistrates' Court in the British capital on August 17, London's Metropolitan Police said.

"The CPS (Crown Prosecution Service) has authorized the Metropolitan Police to charge Jaswant Singh Chail with offences after he was arrested in the grounds of Windsor Castle on 25 December 2021 carrying a crossbow," the CPS, which oversees prosecutions in England and Wales, said.

"This decision has been made following an investigation carried out by the Met's Counter Terrorism Command."

Chail has been charged under the Treason Act, which makes it an offence to assault the Queen, or have a firearm or offensive weapon in her presence with intent to injure or alarm her, or to cause a breach of peace.

At the time, the Met said officers had arrested and detained a 19-year-old man for mental health treatment after a crossbow-wielding intruder broke into the grounds of Windsor Castle.

Security processes were triggered within moments of the breach and the individual did not enter any buildings, the force had added.

The incident happened as the Queen spent a low-key Christmas Day at Windsor Castle with her eldest son and heir to the throne, Prince Charles, and his wife Camilla.

The Queen usually celebrates Christmas at her Sandringham estate in eastern England, but she remained in Windsor last year as a precautionary measure amid resurgent Covid-19 cases at the time.

Although the intruder was intercepted quickly, it recalled an earlier, more serious intrusion in 1982.

On that occasion, a man in his 30s entered Queen Elizabeth's private chambers at Buckingham Palace while she was in bed before police apprehended him.

Last summer, a man was arrested after scaling the gates of the Palace.

In 2020, a homeless man scaled its walls and bedded down for the night in its grounds before being caught.