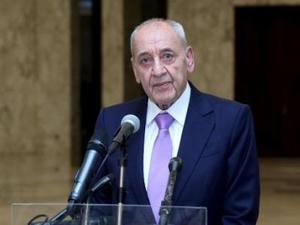 Thousands of Iraqi protesters have been occupying the parliament in Baghdad's Green Zone for the past five days.

The mass sit-in is led by followers of powerful Shiite Muslim preacher and political kingmaker Moqtada Sadr, who is facing off against a rival, Iran-backed Shiite faction called the Coordination Framework.

Berri, in his statement, urged all Iraqis to respond to the PM's invitation for dialogue and wished stability for Iraq.

He also called for dialogue in Lebanon to resolve all disagreements.

Nabih Berri will forever be known for two events:
1. Freezing parliament for 2 years to prevent the international tribunal and protect Hizbollah assassins. An act that destroyed downtown Beirut and set the wheel of economic collapse, irreversibly damaging Beirut reputation, suffocating Cedar Revolution achievements, and transforming Lebanon into a banana republic under Basij occupation.
2. History seeing in him the Butcher of Teheran as in 2010 when Iranian educated and productive part of Iranian society raised up against the oppressive Iranian revolutionary guards and were killed in the thousands by the Basij for asking the same freedom and democracy Lebanese Shia had, Berri sided with the Basij against the aspirations of the Iranian people. Green Revolution would have succeeded if Lebanese Shia supported it. That’s his legacy! What a phony heir to the great Imam Sadr.

Berri says that Iraq should adopt a constitutional amendment assigning half of the seats in the national legislature to Christians. "It's worked well so far for us," Berri told reporters during a recent shopping trip in Switzerland.