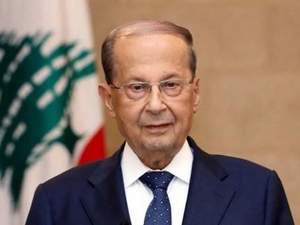 President Michel Aoun marked the second anniversary of the Beirut port blast on Thursday by saying that he shares “the grief of the victims’ families and the suffering of the detainees’ families.”

“I stress to them my commitment to fulfilling justice that is based on full truth, which should be unveiled by an honest judicial course that would go until the end, away from any falsification, selectivity or injustice, in order to hold accountable anyone whose involvement is verified,” Aoun said in a tweet.

“No one is above the law,” the President added.

.. and so Aoun announced what, precisely? What is he now causing to happen that will realize Justice?

Tweeting is neither governing nor a bold action of a leader ... anyone over the age of 6 can do it just as well as anyone else ...

No one is above the law.... Except the politicians, their relatives, the wealthy. Or anyone with a wasta.

Aoun caved in to kizbs demands and should have demanded an international inquiry--he will forever be known as the worst leader in the world and his leadership or lack of, has caused the biggest economic collapse in at least the last 150 years.