Al-Rahi voices anger against 'all officials', says port blast may be 'crime against humanity' 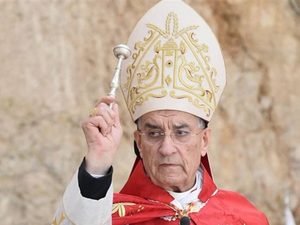 Maronite Patriarch Beshara al-Rahi on Thursday said he raises the “voice of anger against all officials, whoever they may be, wherever they may be and no matter their status,” in remarks marking the second anniversary of the tragic Beirut port blast.

“They are obstructing the investigation, as if everything that happened was a silly and trivial accident,” al-Rahi said during a mass commemorating the victims.

He accordingly lamented that “today we are before two crimes: the port blast crime and the crime of freezing the investigation.”

“The suspension of the investigation is not of a lower magnitude than the explosion, because it is a deliberate act that reached the extent of sowing discord among the families of the victims,” al-Rahi added.

“What’s needed is for the investigative judge to resume his work in order to reach the truth… We do not accuse anyone and we do not acquit anyone. Citizens want justice and we reject that some of the defendants are on the loose while other defendants are innocent and detained,” the patriarch went on to say.

“From our experience, we know about the politicized judiciary in Lebanon, and from the first day of the port blast we demanded an international investigation, because the crime might be against humanity if it turns out to be a deliberate act,” al-Rahi said.

He accordingly emphasized that “the state cannot refrain from conducting a local probe while simultaneously obstructing the conduct of an international investigation.”

This guy is such a fool, he wields so much power and doesn’t put it to good use. He has the power to summon every Maronite politician which includes the president, he can make demands and threaten to excommunicate them (to make them jobless) in return of good governance… what a pitiful fool.