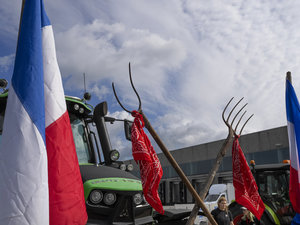 Representatives of Dutch farmers were meeting Friday with Prime Minister Mark Rutte and other Cabinet ministers to discuss the government's nitrogen emissions reduction goals that have sparked disruptive protests in recent weeks.

But the prospect of success appeared slim, with two main activist farmers' organizations demanding concessions and not attending because they have no trust in the veteran politician appointed to act as intermediary. They say the mediator, Johan Remkes, is not independent.

Rutte did not comment to reporters as he entered the meeting in the central city of Utrecht.

Farmers angry at the target of slashing nitrogen emissions 50% by 2030 have blockaded supermarket distribution centers, parked tractors on highways and dumped garbage including manure and asbestos on roads in recent weeks.

Rutte has criticized what he said are small groups of farmers who he says have endangered others with the nature of their protests. "Willfully endangering others, damaging our infrastructure and threatening people who help clean up is beyond all limits," he wrote on Twitter last week.

The government has been forced to act after courts in recent years began blocking permits for infrastructure and housing projects because the country was missing its emissions targets.

The government has earmarked an extra 24.3 billion euros ($25.6 billion) to finance agricultural reforms that will likely make many farmers drastically reduce their number of livestock or get rid of them altogether. Provincial authorities have been given a year to formulate plans to cut emissions.

"It is of enormous importance that we, together with the other agricultural parties, really expect something from this Cabinet," Van der Tak said on his way into the talks.

LTO says there are nearly 54,000 agricultural businesses in the Netherlands with exports totaling 94.5 billion euros in 2019.

The Dutch minister responsible for nitrogen, Christianne van der Wal, said she had no expectations heading into the talks.