US stays top of FIFA women's rankings; England up to No. 4 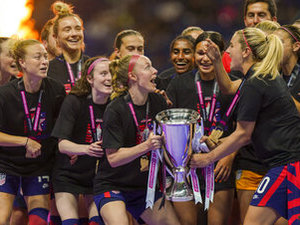 The United States women's soccer team extended its five-year reign atop the FIFA rankings on Friday and new European champion England moved up to No. 4.

The U.S. won its regional championship for the third straight time in July and leads No. 2 Germany, which rose three places despite losing the Euro 2022 final on Sunday.

Sweden, the 2020 Olympics silver medalist, drops one place to No. 3 after being beaten by England in the semifinals at Euro 2022.

Fifth-place France and No. 6 Netherlands both dropped two spots. Olympic champion Canada is No. 7.

New African champion South Africa jumped four places to No. 54 in the rankings which now include a record 185 of the 211 FIFA member federations.