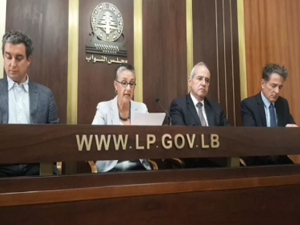 MPs Najat Aoun Saliba and Melhem Khalaf on Monday held a press conference in parliament to tackle the issue of the long-running blaze at the blast-hit grain silos of Beirut’s port, which has been burning for around a month.

“There are risks from lengthy exposure to the fine particles and cancerous material emanating from a protracted burning of grains at the port’s silos,” Saliba said.

“Fermentation is the source of the spread of some toxic gases, such as carbon dioxide and nitrogen dioxide. With the burning of these gases, carbon monoxide might reach dangerous levels,” she added.

Saliba warned that inhaling the blaze’s smoke, even for a short period of time, can irritate the eyes, the nose and the throat and might cause instant acute and serious complications.

She added: “Exposure to smoke for brief periods in a repeated manner or on the long term might lead to long-term health problems. Studies have proved that lengthy exposure to air directly containing PM2.5 particles might lead to increasing heart and vessel diseases and accordingly deaths.”

Saliba also warned that the the exposure risk “is not only limited to the areas that are close to the source of gases,” adding that “some recent studies have showed that the risk also extends to far areas, due to the chemical reactions of smoke particles.”

“We stress that leaving the burning grains at the port’s silos poses a major health risk to Beirut’s residents, and if the fire remains without being contained, the silos’ towers will collapse one after another, which in itself is considered a major source of PM2.5 particles, leading to aggravating the risk that we’re living,” Saliba added.

Accordingly, she called on the competent ministers to answer a series of questions and to “devise an immediate intervention plan to resolve the problem,” demanding answers within two days and threatening to debrief the ministers in parliament if they don’t respond within the deadlines.

They also vowed to “communicate with all competent parliamentary committees, such as those related to environment, health and other issues.”

“We will not rest before putting an end to this veiled disaster that is affecting the city and its residents,” they added.