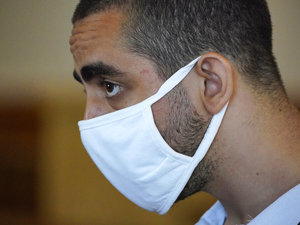 U.S. District Attorney Jason Schmidt has told a court judge that Hadi Matar took steps to purposely put himself in position to harm "The Satanic Verses" author Salman Rushdie, getting an advance pass to the event where the author was speaking and arriving a day early bearing a fake ID.

"This was a targeted, unprovoked, preplanned attack on Mr. Rushdie," Schmidt said.

Public defender Nathaniel Barone complained that authorities had taken too long to get Matar in front of a judge while leaving him "hooked up to a bench at the state police barracks."

"He has that constitutional right of presumed innocence," Barone added.

Rushdie, 75, suffered a damaged liver and severed nerves in an arm and an eye. He was likely to lose the injured eye.

Investigators were working to determine whether the suspect, born a decade after "The Satanic Verses" was published, acted alone.

District Attorney Schmidt alluded to Ayatollah Khomeini's fatwa as a potential motive in arguing against bail.

"Even if this court were to set a million dollars bail, we stand a risk that bail could be met," Schmidt said.

"His resources don't matter to me. We understand that the agenda that was carried out yesterday is something that was adopted and it's sanctioned by larger groups and organizations well beyond the jurisdictional borders of Chautauqua County," the prosecutor said.

Barone, the public defender, said after the hearing that Matar has been communicating openly with him and that he would spend the coming weeks trying to learn about his client, including whether he has psychological or addiction issues.

Matar is from Fairview, New Jersey. Rosaria Calabrese, manager of the State of Fitness Boxing Club, a small, tightly knit gym in nearby North Bergen, said Matar joined April 11 and participated in about 27 group sessions for beginners looking to improve their fitness before emailing her several days ago to say he wanted to cancel his membership because "he wouldn't be coming back for a while."

Gym owner Desmond Boyle said he saw "nothing violent" about Matar, describing him as polite and quiet, yet someone who always looked "tremendously sad." He said Matar resisted attempts by him and others to welcome and engage him.

"He had this look every time he came in. It looked like it was the worst day of his life," Boyle said.

Matar was born in the United States to parents who emigrated from Yaroun in southern Lebanon, the mayor of the village, Ali Tehfe, told The Associated Press.

Flags of the Iran-backed Hezbollah are visible across the village, along with portraits of leader Sayyed Hassan Nasrallah, Khamenei, Khomeini and slain Iranian Gen. Qassem Soleimani.

Journalists visiting Yaroun on Saturday were asked to leave. Hezbollah spokespeople did not respond to requests for comment.

Iran's theocratic government and its state-run media assigned no motive for the attack. In Tehran, some Iranians interviewed by the AP praised the attack on an author they believe tarnished the Islamic faith, while others worried it would further isolate their country.

On Friday, on AP reporter witnessed the attacker stab or punch Rushdie about 10 or 15 times.

What a good Shia he is… walking in the path of the terrorists.

Schmidt is the DA of Chautauqua County, in New York state, elected to that post in 2020. In the US, there are two parallel prosecutorial functions, and there are both federal and state criminal courts. The federal prosecutors are called "U.S. Attorney" or assistant thereto. There is no such thing as a "U.S. District Attorney".

Iran is to blame for this- we need the Israelis to destroy Tehran. Maybe a few hellfire missiles for the Iranian clerics who hold power- destroy them like Al Zawahiri.

Another brainwashed Basij! Charmed by Sulaimani Kiss of Death that brought misery and backwardness to all Shia communities in the region and made Iraq, Yemen, Lebanon and Syria Banana Republics; a black hole where democracy, freedom, human right, and civility never shine. Anyone thinking there are no consequences to how Shia elected its representatives is just dreaming! Time to divide Lebanon between Free Lebanon and Hizbollahstan before this cancer spread to all regions digging deeper in hell as there are nothing left in common.