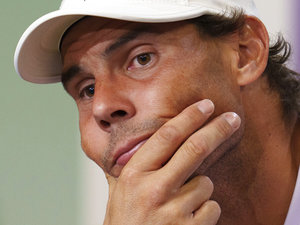 Carlos Alcaraz will lead Spain against Novak Djokovic's Serbia next month in the Davis Cup group stage after Rafael Nadal wasn't named to the Spanish team on Monday.

Nadal is set to return to competition at this week's hard-court tournament in Cincinnati after an abdominal injury caused the 22-time Grand Slam champion to pull out of Wimbledon ahead of the semifinals.

The injury also kept him out of this month's event in Montreal, another hard-court warmup event before the U.S. Open, which begins in New York on Aug. 29.

Spain and Serbia also play Canada and South Korea in Valencia, one of four European cities hosting the group stage Sept. 13-18. The other cities are Bologna, Hamburg and Glasgow.

Former world No. 1 Andy Murray will play in the tournament for the first time since 2019 after being named to Britain's team that will face the United States, Kazakhstan and the Netherlands in Scotland.

Second-ranked Alexander Zverev, who had surgery in June to repair torn ligaments in his right ankle, will lead the German team in Hamburg against France, Belgium and Australia.

Marin Cilic, the 2014 U.S. Open champion, will lead Croatia against Italy, Argentina and Sweden in Bologna.

The top two teams from each group advance to the knockout stage in Malaga on Nov. 22-27.