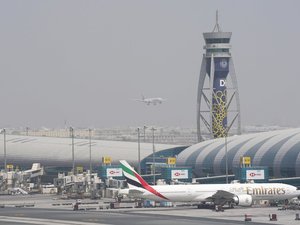 Dubai International Airport saw a surge in passengers over the first half of 2022 as pandemic restrictions eased and the upcoming FIFA World Cup in Qatar will further boost traffic to the city-state's second airfield, its chief executive said Wednesday.

Paul Griffiths, who oversees the world's busiest airport for international travel, told The Associated Press that the airport handled 160% more traffic over the past six months compared to the same period last year, part of an air travel rebound around the world.

"It's a very, very welcome surge of traffic," Griffiths said.

The first World Cup in the Middle East, he added, will send foreign soccer fans flocking to Al Maktoum International Airport at Dubai World Central, or DWC. From there, they'll travel daily to Qatar, a tiny neighbor that faces a hotel squeeze.

"We've actually seen a huge amounts of demand at DWC for slot filings for airlines wanting to operate a shuttle service," he said. "I think the city has a lot to offer and a lot to gain from the World Cup."

Among the airlines buying extra slots to shuttle soccer fans to the tournament from DWC are Qatar Airways, low-cost carrier FlyDubai and budget airline Wizz Air Abu Dhabi, he said.

Ambitions plans to turn the airfield in Dubai's southern desert into a mega-aviation hub, first unveiled by Dubai before the 2008 global financial crisis, have sputtered in recent years. Long-haul carrier Emirates, based in Dubai, parked many of its double-decker Airbus A380s there during the pandemic as commercial flights halted.

A key East-West transit point, Dubai's air traffic is closely watched as a barometer of the city-state's non-oil economy. Emirates remains the linchpin of the wider empire known as "Dubai Inc.," an interlocking series of government-owned businesses.

During the first half of 2022, Dubai International Airport dealt with nearly 56% more flights than the same period in 2021, when contagious coronavirus variants clobbered the industry.

Now, in a sign of the health of the industry, Emirates said Wednesday that it would pour billions of dollars into retrofitting much of its Airbus A380 and Boeing 777 fleet. At the height of the pandemic, the airline received a $4 billion government bailout.

The widespread lifting of virus restrictions has triggered a rapid increase in air travel demand, filling Dubai's hub and causing mayhem at airports around the world.

While Dubai has not seen the chaotic crowds overwhelming European hubs in recent weeks, Griffiths said the global disruptions have affected its main airport.

"It's obviously affected growth because some of the caps on capacity that they've applied to airports like Heathrow have had an impact on our numbers," he said.

Last month Emirates lashed out at Heathrow, refusing its request to cap departing passengers and cut flights to the London hub. Emirates later agreed to temporarily limit sales on its flights.

Since Moscow's invasion of Ukraine sent Russia's richest businessmen scrambling to save their assets from what became a widening dragnet, Dubai has welcomed an influx of Russians to its beach-front villas and luxury hotels. The city remains one of the few remaining flight corridors out of Moscow.

Griffiths declined to comment on Russians carrying cash out of the country to Dubai, which has become the talk of the town in recent months.

But he said the flow of Russian visitors would not stop anytime soon, adding: "It's still a major source of traffic for us."