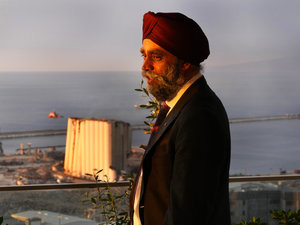 Syria is not safe yet for millions of refugees to start going back home, a Canadian minister has cautioned during a visit to Lebanon. He spoke days after Lebanese officials announced a plan to start returning 15,000 Syrian refugees to their war-shattered country every month.

The remarks by Harjit Sajjan, Canada's minister of international development, followed his tour of the region that also took him to Jordan, where he visited Syrian refugees living in tent settlements.

More than 5 million Syrians fled their country when the conflict began 11 years ago, with most of them now living in neighboring countries Turkey, Lebanon and Jordan. Lebanon, which has taken in 1 million Syrians, is facing an economic meltdown and unprecedented financial crisis — and is eager to see the refugees return.

On Monday, Syria's Minister of Local Administration Hussein Makhlouf said Syrian refugees in Lebanon can start returning home, pledging they will get all the help they need from authorities.

However, the U.N. refugee agency and rights groups oppose involuntary repatriation to Syria, saying the practice risks endangering the returning refugees. Human rights groups have said that some Syrian refugees who returned home were detained.

"It is very, very important to make sure that there is an absolute safe environment where they can return to," Sajjan said in an interview with The Associated Press. "Clearly, right now, based on our assessments Syria is not a safe place for people to return."

"These are very proud people, who want to go back home. They don't want to live in these conditions," Sajjan said, adding that any return will have to be a "voluntary situation."

Over the past few years, Canada has resettled tens of thousands of Syrian refugees, some of them from Lebanon and Jordan. Sajjan, a former defense minister and ex-member of the military who served in Afghanistan said he saw first-hand the effects and "horrors of war, which pushes people out."

"No one wants to leave their homes, but they have to," he added.

He said Canada will continue to look at ways, with multinational partners, to provide the appropriate direct support for the Lebanese people and "the vulnerable Syrian refugees as well."

The calls for the return of Syrian refugees have increased in Lebanon since its economic downturn began in late 2019, leaving three-quarters of Lebanese living in poverty. For Syrians, living conditions have become much worse.

Sajjan said that during his talks with Lebanese leaders, he urged them "to move as quickly as possible" to reach an agreement with the International Monetary Fund on a bailout program.

He stressed that IMF's demands on Lebanon are "all legitimate things that are being asked for, given how the economic crisis has unfolded."

Ahead of any deal with IMF, Lebanon still has to draft legislation on combatting money laundering and a law on capital controls.

Lebanon's crisis was further exacerbated by the massive August 2020 explosion in Beirut's port that killed more than 200 people, injured thousands and caused billions of dollars in damages.

Sajjan expressed hopes that the investigation into the explosion would resume soon. The domestic investigation has been stalled since December, due to legal challenges raised by some politicians against the judge leading the probe after he had filed charges against them.

"I think the impact of the explosion ... has shocked the world," Sajjan said. "We are hopeful that the current investigation can move forward in a transparent way."

Canada can provide "absolute safe" environment for these "proud" Syrian refugees. Start making plans to accommodate them safely in your country.

Canada and Australia are vast and empty countries, take them in!