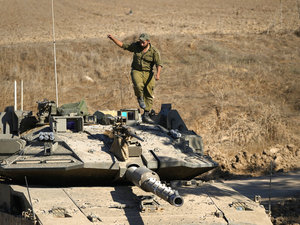 A Palestinian shot by Israeli troops during clashes near a flashpoint holy site in the occupied West Bank died of his wounds on Thursday, Palestinian officials said.

A hospital official in Nablus in the northern West Bank said the 20-year-old was shot overnight.

He was identified as Waseem Abu Khalifa, who died from "serious wounds resulting from gunfire by the Israeli military during the confrontations", the official Palestinian news agency Wafa reported.

The Palestinian Red Crescent Society said 31 people were wounded during clashes around Joseph's Tomb in Nablus.

Khalifa was a resident of Balata, a refugee camp close to the tomb, Wafa said.

The tomb, which is believed by some to be the last resting place of the biblical patriarch Joseph, is a flashpoint for violence in the West Bank, and revered as a holy site by some Muslims.

The Israeli military said it had carried out an operation to "secure the entrance of (Jewish) worshippers to Joseph's Tomb in the city of Nablus".

"During the activity, the soldiers fired toward armed suspects who shot at them. Hits were identified," it added.

Israel has occupied the West Bank since the Six-Day War of 1967, when it seized the territory from Jordan.