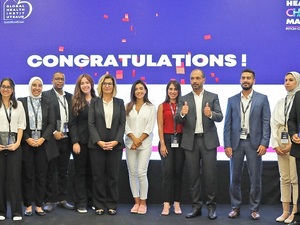 In celebration of its fifth anniversary, the Global Health Institute (GHI) at the American University of Beirut (AUB) has organized the Global Health Change Makers” pitch competition. The event brought together students from universities of the Middle East and North Africa (MENA) region to present their project ideas related to Global Health and the U.N. Sustainable Development Goals (SDGs) through a 5-minute pitch for a chance to win seed funding.

Seven competitors coming from different countries in MENA including Egypt, Syria, Lebanon, the United Arab Emirates and others were shortlisted to the final stage and participated in the competition that was held at AUB, the university said in a statement.

In his opening remarks, Dr. Shadi Saleh, GHI founding director, spoke about how GHI adopted the U.N. SDGs through its programs and initiatives in order to help create a world that is healthier, more sustainable, and resilient. Dr. Saleh pointed out that this event promotes positive outcomes by giving the necessary support for youth development and providing opportunities to young people, the change makers, for a future with equality, safety, and health equity.

The presented pitches were scored by a jury panel consisting of five judges including Dr. Najat Saliba, member of the Lebanese Parliament; Jessica Azar, TV host at MTV Lebanon; and Dr. Lama Moussawi, director at the Center for Inclusive Business and Leadership (CIBL) at AUB, associate dean for research and faculty development, and associate professor at AUB. The jury panel also included Nour El Arnaout, division manager at the Global Health Institute at AUB; and Dr. Rihab Nasr, director of the Cancer Prevention and Control Program at the Naef K. Basile Cancer Institute (NKBCI), professor at AUB, and founder of AMALOUNA NGO.

"Competing students were evaluated based on the jury panel scoring of each pitch presentation and the assessment of the students’ submitted concept notes that included project objectives, methodology, outcome indicators, relevance to global health and SDGs, implementation timeline, and dissemination/visibility plan," the statement said. It added that each pitch presentation was followed by a five-minute Q & A session during which the competitors addressed questions raised by the jury panel.