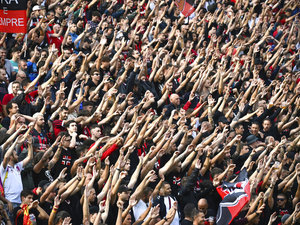 The New York Yankees have purchased a minority stake in Italian football champion AC Milan, which announced the closing of its latest ownership change Wednesday.

RedBird Capital Partners completed the deal to purchase a controlling interest in the seven-time European champion for 1.2 billion euros ($1.2 billion).

It's the second football team the Yankees partially own after MLS's New York City.

Gerry Cardinale, who founded RedBird in 2014 and is the managing partner, announced a preliminary agreement in June to buy Milan from fellow American firm Elliott Management.

Yankees Global Enterprises, the baseball team's parent company led by the Steinbrenner family, will take a stake of about 10%, a person familiar with the negotiations told The Associated Press on Tuesday, speaking on condition of anonymity before the final deal had been announced.

Details of the Yankees' involvement were not divulged in the announcement.

The Yankees agreed in 2013 to purchase a 20% stake in the New York City Major League football team that launched in 2015. City Football Group, Manchester City's parent company, is the controlling owner.

"We have a multi-decade relationship with the New York Yankees and the Steinbrenner family that has resulted in the creation of some of the most successful businesses in sports, entertainment and hospitality," Cardinale said in a statement on Milan's website.

"We are very pleased to continue our partnership with them and will look to explore opportunities together to broaden our fan reach and expand commercial opportunities that are only available to franchises that operate at the highest levels of sports globally."

The closing comes just in time for Cardinale to make his debut as Milan's new president at Saturday's derby against city rival Inter Milan.

"Our vision for Milan is clear: we will support our talented players, coaches and staff to deliver success on the pitch and allow our fans to share in the extraordinary experiences of this historic club," Cardinale said.

"We will look to leverage our global sports and media network, our analytics expertise, our track record in sports stadium developments and hospitality to deliver one goal — maintaining Milan's place at the summit of European and world football."

The Yankees, 27-time World Series champions, are signing a separate marketing agreement with Milan, a 19-time Italian champion, that will include broadcasting replays of games on the YES Network, as Manchester City does. There also will be cross-merchandising between the pinstripes and the Rossoneri.

Milan is coming off its first Italian title in 11 years.

RedBird also has a stake in Fenway Sports Group, the parent company of Liverpool and the Boston Red Sox. Champions League rules prohibit two clubs in the competition from being under the same ownership to protect the integrity of games on the field. UEFA likely will have to make a judgment on the extent of RedBird's influence on decision-making at Liverpool.

Milan was owned from 1986 to 2017 by a former Italian prime minister, Silvio Berlusconi, who sold to a company controlled by Sino-Europe Sports Investment Management Changxing Co. The American hedge fund Elliott provided financing and took control of the team in 2018 when loan payments were not made.