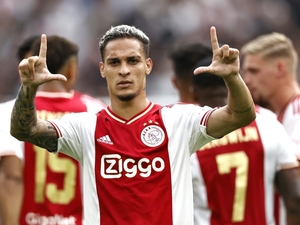 The cost of living crisis in England has passed Premier League clubs by with the all-time record for an entire season, £1.86 billion ($2.15 billion) from 2017-18, under threat of being broken come the closing of the transfer window later on Thursday.

Cristiano Ronaldo's 37-year-old legs and sky-high wages have deterred Europe's aristocracy from signing him from Manchester United and granting his wish for Champions League football.

However, in contrast United and their domestic rivals have found no outlandish fee or wage demands beyond them.

As of last Thursday, gross spending by the 20 Premier League teams stood at £1.5 billion, surpassing the 2017 record of £1.43 billion spent by English clubs in the close-season window.

It was also more than the £1.44 billion spent in the whole of last season.

Manchester United helped reduce the gap further early on Thursday as Erik ten Hag was reunited with another of his former Ajax proteges, Antony.

The 22-year-old was prised away for a reported 95 million euros, making the Brazilian forward the fourth most expensive player in Premier League history.

"This is an incredible moment in my career to be joining one of the most iconic clubs in the world," Antony said in a statement on United's website.

His fee is a record for an Eredivisie player, demoting former Ajax team-mate Frenkie de Jong's 86-million-euro move to Barcelona to second. Ironically, United have pursued the latter throughout the close season without success.

Antony is likely to be United's last big money signing of this window, with a reported £60 million for 30-year-old Brazilian midfielder Casemiro their other eye-catching capture.

"As a manager you always want more," said Ten Hag.

"You always want to maximize but at a certain point you also have to be satisfied with what is there."

His spending pales into insignificance compared to that of Chelsea, whose indifferent start to the campaign mirrors that of United's.

Thomas Tuchel has outlaid around £250 million of the American owners' money, receiving similar backing to that of former owner Roman Abramovich in the transfer market.

Having finally got French defender Wesley Fofana for a reported £70 million on Wednesday, Tuchel is still keen to sign veteran Gabonese striker Pierre-Emerick Aubameyang from Barcelona.

The 33-year-old would cost around £7.5 million with Chelsea defender Marcos Alonso also part of the package.

This despite Aubameyang being sidelined for several weeks after having his jaw broken in a break-in at his house earlier this week.

There are also rumors that Tuchel is keen to denude Ajax of another star, Edson Alvarez, who would be considerably more expensive than Aubameyang.

Liverpool have been relatively parsimonious in the transfer market, but Jurgen Klopp is known to want a midfielder -- even more so with Jordan Henderson going off injured in the 2-1 win over Newcastle on Wednesday.

Klopp is a known admirer of Aston Villa's Brazilian midfielder Douglas Luiz, who has a year left on his contract.

Villa could do with him as they have made a poor start to the season -- they are second from bottom after five matches -- but their manager and former Liverpool captain Steven Gerrard admits the matter is out of his hands.

"There's more than two people that are in control of that but I'm certainly not one of them," said Gerrard.

"We are not in a position where we need to lose top players.

"But at the same time, Douglas has got a year to go and it is really one of those really touchy situations where the club has to do what is best for the club, not necessarily what is best for me."

Liverpool are also trying to bring in Brazilian midfielder Arthur Melo on loan from Juventus.